Roll With It, Baby

I just got the text from my boss after dropping my daughter off on her last day of high school before schools close for two weeks: Work from home until further notice. This was yesterday morning. Turns out school was only until noon, and they basically just were instructed on how they could continue some classwork from home on laptops.


I stopped the car and tapped a quick, "ok" in response, and as I did that, the song "Deacon Blues" from Steely Dan was on my car radio. It finished within a few seconds, and then I heard, "when life is too much, roll with it, baby". When that happens, ya gotta write about it, yeah?


We had had a preparedness drill on Wednesday where we worked from home, returned to the office on Thursday. I wish they had told us then that we'd be remote from then on. I could have brought home my better headset and laptop docking station. I might still go get them. I like my desk set up at the office. Here at home, it is less so. But, roll with it, right?

After I realized I had an extra hour on my hands due to a suddenly canceled commute, I decided to get some breakfast. I headed towards Mickey D's, and on the way thought, maybe I'll go in the grocery store, not to buy anything as I had the night before, but just to see how much more bare the shelves were. When I saw the full parking lot at 9 AM on a Friday, I just thought, "No".

Somewhere in all this, the old phrase came to mind, that after I looked it up online in a few places including here, "May you live in interesting times". It certainly feels, uh, interesting right now. I'm reminded of 9/11, as many are right now. But of course, the coronavirus situation is much different. 9/11 included a lot of fear just like now, but I seem to recall that after a few days, maybe a week, folks could start to breathe again. At least there was confidence more physical attacks weren't imminent.

I definitely think that there is a seriousness to the virus itself, and I certainly want to see it's spread slow quickly. It is scary, though I personally don't feel in danger. And that's where the actual fear comes in. I thought about the Black Death. I wondered how the people at the time felt about it. It was a much different time. There were a lot fewer people. A lot less medical knowledge. No social media. No international plane travel. Not even a lot of travel by boat as compared to now. And so on.

But, did they think at first, "it's not that big a deal"? And did it slowly dawn on them that it WAS a very big deal? They didn't have the news and social media to feed them fear like we have now. They just had people start dying in large numbers around them. They had relative ignorance, but still, they were human, they had emotions. I haven't read up on it since I avoid negative stuff in general, but I'm' very curious about that. It's the parallel I draw to now.

In any event, we are where we are. Food and toilet paper and many other things are in short supply. The world seems to be slowly, or maybe quicker now, grinding to a halt. Which is sad. But, I think, necessary to stop the spread. I think the real problem is the people spreading panic, and those trying to take advantage of the situation.

It was funny, I saw a tweet yesterday from a younger trans woman that basically was saying, "social distancing, welcome to my world. I'm already doing that". For once, it's a benefit to me that I don't have much of a social life right now. It's less of a shock to my system. I feel for folks who are out and about all the time, doing things as simple as yoga classes or art classes, or anything that is now getting canceled in the name of the greater good.

I'll leave you with a little graphic I got via email from my counselor last night about coping with all this. Perhaps it will help some of you who read this as the days go by. Help your families and friends who might struggle. Share, talk, communicate. Be human. We HAVE THE TECHNOLOGY!

Be well, friends. Roll with it. 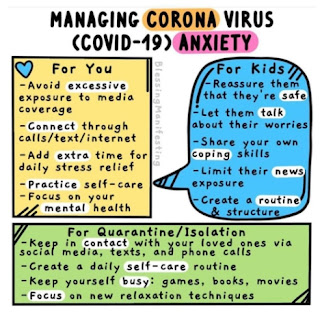 What I've Been Reading...