For Your Consideration: COVID-like Isolation, Extended Into The Past 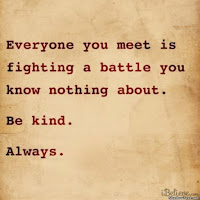 First, and most important. What you are about to read can very possibly be considered some heavy lamenting. Or just whining and complaining. So please know I am not at all comparing what I'm writing about to actually HAVING COVID-19. I'm talking about a circumstance of COVID which I believe very, very many can relate to nowadays.

Second, I'll get to the gist quickly so you can move on. If you read it all, very cool.

Premise: You know how most all of us are struggling with not having the freedom to just go visit a friend because of COVID? How when things get wonky, sometimes you just want to go to someone's house and do whatever: drink coffee or wine, sit and watch a movie, etc.? And it sucks bad because you can't? Imagine if that wasn't just a 2020 thing and it was the case as far back as you can remember. Suck worse? For me, that's been the case. It's not that I was forbidden, I just literally had nowhere/no one to visit. Or thought I didn't. Either way, it didn't happen.

This year, 2020, has been hard on all of us. And it's not like no one had hard times before that whole mess started. For me, reality smacked me in the head again this morning, and it sent me reeling. I've taken a mental health day to try to get back on track. I found myself making a Facebook post at the low ebb of my emotions, to which several people came to support me through comments.

When you're under a bus, it's hard to get the arm angle to throw others under the same bus, or a different bus. Dan Quisenberry couldn't submarine one under. And I really don't want to do that anyway, because it's just my side of the story, and it takes more than one person to have an interpersonal "situation". I was left with making my usual somewhat-cryptic remark and people did their best to support me without having many contexts.

I really appreciated the efforts but was frustrated, mostly at myself, for not getting my point across better. So, I went for a walk in my neighborhood. In between dogs barking from behind literal as well as invisible fences, and myriad cars going to and fro, and me listening absent-mindedly to an offseason baseball podcast about nothing in particular (I mean, Noodles Hahn?) I did some thinking.

Somewhere along the way, I realized, maybe that's a way others might understand better part of my frustration. When things are not going well at home, I have nowhere to go. I haven't had anywhere to go in many years. I can go eat, or to a store, then and now, but I have nowhere to VISIT. I have no one to visit. Until I went to my cousin's house back in September, I have no earthly clue the last time I visited a friend of MINE.

An awful lot of that is my fault. Maybe all of it. One of the early internet COVID jokes (again, about the circumstances, not the virus) amongst some people like me (introverted, trans) is like, "we can't go anywhere. what's the big deal. this is our lives anyway."

That has stuck with me and actually helped me understand why so many people have had a really hard time adjusting. So many people are used to being able to go SOMEWHERE. Many somewheres. Maybe too many somewheres to be able to cope with having to cut back/stop going ANYWHERE. I feel for the extroverts, seriously. Zoom isn't the same and I know it.

In my mind, I examined the claim I was making about myself until I got back home, and I find it's pretty accurate. Anywhere I have gone, even when I was home for a few days when my dad had his heart attack a couple years ago, it holds true. If I did visit someone's home, it was my wife's family, or maybe in rare cases some friend of one of the kids. Never for me. Maybe I am forgetting some occasions, but I don't think so.

Now those places with the family or the kids, regardless of COVID, they are gone too. We still live together, but I've been put off to the side. It's easier if I don't go to family gatherings. In ways, I never want to be where I know I'm not wanted. So it's fine, mostly.

Most of the people that have expressed care and support and love for me, they live very far away. It's not like I can risk anyone's exposure and go visit them. And OMG, how much I want to. I have a ridiculous amount of hugs to give for recent kindnesses. But I can't. This year, in which I have grown so much and realized I needed to change, to embrace other people while being the person I really am, I can't. Same as you. It feels like a leveled playing field. And I hate that, for ALL OF US. This year's been hard.

That's it, I guess. Just one more attempt to give some context, to illustrate the situation. Some ramblings that maybe let someone who reads this and feels similarly know they aren't the only ones.