What I'm Talkin' About 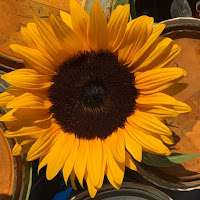 A short one. No need to overplay it. Today, a nice compliment begat something really great (to me, at least).

Simply put, I was perusing Facebook when I was supposed to be working (again) and saw a new picture posted by my old neighbor, Angela. In the picture, she was wearing a pretty blue dress and a cool summery hat similar to one I have. So, I decided to compliment her on the look. "Great dress and hat", I say.

No big deal, right? Happens millions of times per day on FB, I'm sure. A few minutes later, I got a "like" on my comment and a response that just said "thanks, babe". At first, I didn't really pay attention to it, but later I got to thinking about that little 2-word reply from her.

Angela had made a point not long after I came out to friends and family online to compliment me on my look and befriend me on FB. We haven't actually seen each other in decades but have chatted a little bit that day and since. So of course, I see her posts now and remember her spirit as a kid, so to get called "babe" wasn't unusual coming from her. So, as I was driving home from work, I thought, "you know, she said that as if we were girl friends, and not like I was the guy she used to know".

I found it remarkable (and bloggable), because I'm not used to that sort of thing, but I can tell you that it is EXACTLY the kind of thing a trans girl hopes to get from a cis woman. Inclusion, being treated the same as other friends. That's what I've wanted for a long time: to be able to compliment a woman on her outfit (me being the shy type) and not being thought of as a creepy guy or a threat to someone's male partner. And I realized today that now I can do that. And it made me smile. Pretty simple. Kindness between two girl friends.

I got home and sought out Angela on chat, to confirm my thoughts that it was the same kind of thing she calls her other girl friends. I'll paraphrase here, but she said she calls every girl friend she has "babe". Or bitch. LOL. She told me she thinks of me as just another girl friend from the old days.