Walk A Mile In Her Heels - Lisa

I have known Lisa for a while from chatting with her occasionally online. I was always impressed by her story, and her goals moving forward. So much so that I decided to request this interview, which she graciously accepted. Her thoughtful and honest answers to my questions are very much appreciated. Now we get to see what a mile in Lisa's heels is like. Enjoy!

Previously in the "Walk A Mile In Her Heels" series: Suzi  Chrissy  Erica  Tawni  Leanne (from Oz)

Shannyn Comes Alive: Tell us a little about where and how you grew up. Who were your biggest influences as a child?

Lisa: I grew up in Flint, Michigan. My father was an alcoholic and my mom was a bible-thumper. They got divorced when I was eight, both being very vocal about how terrible the other one was. Both parents are very racist and homophobic to this day. If either of them knew I was Lisa they would never speak to me again. I should be so lucky!

My biggest influence or at least one of my influences was Cindy Crawford. I had her poster on my wall when I was a kid which gave the illusion of "normal" for my parents' sake but I loved her beauty and femininity. There was a girl in my school that kind of looked like her. Her name was Lisa so that is part of where I got my name from; my male name starts with an L so it was easy to pick Lisa as an adaptation of my legal name.

SCA: You are in the process to live full-time as Lisa. Have you always felt female, or can you pinpoint when you first knew you were not male?

Lisa: Yes I am in the process of it, but haven't always known I was a girl. I was never allowed to even think thoughts like that. However, I guess deep down I have always wanted to be a girl. Once during sex-ed class I stole one of the girls' booklets. I wanted to find out what was going on and what they looked like because I wanted to be like them. This was in the fifth grade; I was ten. I tried throughout my life to suppress these feelings but they never went away. I got married to try and live up to others' expectations of what I should be, but I found I was never happy. Once my marriage ended, I realized it was because I want to be a wife, not have one.

SCA: Did your wife know/suspect anything of your femininity, or did you not being in the right gender role contribute little, or a lot, to the marriage breaking up? I know that in many cases, the gender stuff plays an almost unconscious role in other aspects of a relationship not working out.

Lisa: My ex-wife didn't have a clue, as far as I know. Although, once in anger when we were going through the divorce, she said something like, "I hope your next girlfriend is similar size so you can fit into her clothes, too." So, I suppose she did have some clue. I do think that my being trans had something to do with us splitting. I wanted to be a wife a lot more than I wanted to have one. The main factor of us splitting was that she completely changed after we had a child together. The child was her securing money and after she had that she completely shut me out and stopped talking to me. However, wanting to be Lisa was one of many contributing reasons to our split.

SCA: You are and have been an entertainer. Show business often allows people to perform in ways different than their outside lives. How has your profession helped or hindered your ability to be Lisa?

Lisa: Show business has helped me learn how to be good at makeup. Well, show business and YouTube. Show business has also taught me how to move more gracefully and to notice subtleties that I may have otherwise missed. However, I perform as male and will have to stop performing once I no longer present as male. I portray a character who sells a heavy sex appeal to women. I don't imagine I will be able to do that once I look like a woman. I am looking forward to that.

SCA: Is it difficult to play a male character who exudes a sexiness towards women, or is it just another instance of putting on a costume and pretending? How did you wind up with such a male role?

Lisa: It is mostly putting on a costume and acting the role of the costume. It is more annoying than difficult to portray the role. When I was growing up, I was a fan of the artist that I portray. I actually got started in show business by singing karaoke at a bar. Immediately after hearing me sing, people came up to me and asked me if I did shows. I had no idea what that meant but figured it out over the years and fine-tuned it until it became a money-maker for me. That was twenty-five years ago. I wanted to go to school to be a lawyer when I got out of high school, but I got so busy traveling and doing shows that I had to quit college.

SCA: As you embark on your life as your true self, what are your goals? Do you plan to continue as an entertainer, or perhaps something new?

Lisa: I will not be able to stay in entertainment when I live as Lisa, since the character I play is very male. If there are opportunities to entertain as Lisa, I'll listen but it is not what I'm looking for. Transformation is hard and I would prefer to do it in private. No big to-do about coming out. Nobody cares, just start living as Lisa. I will get a job hopefully working at the post office or something of that nature. Once I have my own place and a steady job I will re-assess and see what I want as Lisa when I am living as her. So I guess right now the goal is living as Lisa, my true self.

SCA: Is there any bit of pop culture that encompasses who you are at this stage of your life? Perhaps a book, movie, or song?

Lisa: I'm not a big pop culture girl. I'm more of a hippie type. If I had to pick who encompasses me as I am right now I would say I'm Anastasia from 50 Shades Of Grey. I'm about to embark on a new world as a woman and some of it will be scary. But, sometimes scary is necessary to get to the things you want.

SCA: Tell us about your other interests, whether they be gender-related or not.

Lisa: Away from show business, I enjoy looking pretty, of course. I would love to learn to sew, but wouldn't really say that is gender-related because some feminists might get mad. Gender is a strange thing nowadays. It used to be very black and white but has blended a lot since I was young and is very gray now. Otherwise, I like to play basketball but can't do that more than once a week because of age. I also enjoy running and physical fitness. I am a very physically active person. Exercise, work, and my transition are enough to keep me busy.

SCA: Pictured in this article are your favorite shoes. You provided that by request, since this blog series is called "Walk A Mile In Her Heels". What makes them your favorite? 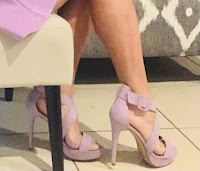 Lisa: These shoes are my favorite because they are 6-inch and I can still walk in them. I just love the color and material.

SCA: (chuckling) Do you envision wearing 6-inch heels at the post office?

Lisa: I am a practical girl. There is a lot of walking involved when a person works at the post office, so I will most likely wear whatever is comfortable enough to get me through the workday. I love heels, but it's not what I would wear to work in. On date night I would absolutely be in 6-inch heels, but I'm not wearing them to work.

SCA: Thank you for this time to get to know you better. One last question: What would you say to a kid that is in a position similar to what yours was, or what would you tell your younger self if you could?

Lisa: If I could tell a child in my situation anything I guess it would be to just accept this side of you and enjoy it. I honestly just came back from visiting with my parents and they are still very hateful towards anyone with an alternative lifestyle. So if a kid were in a situation like mine I would also tell them that once they move away their parents' hatred doesn't exist. It only exists when they are around. If I could tell my younger self anything I guess it would be that same advice.

Shannyn In Your Inbox