My Gender Isn't The Problem 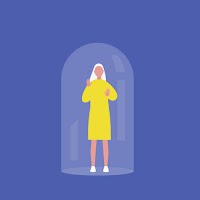 My wife, when we have a decent conversation about things, tends to often say that no matter what I do to my body, or my presentation, it won't fix "what's up here" (points to her head). She means that no matter what, until I can straighten out what's going on between my ears, there's not going to be any happiness for me. And while, on the whole, she doesn't know who I am very well, she still knows me better than most, since we've now been together 23 years. So, she's not wrong.

It's been almost ten months now since I did my "grand reveal" to the wider group of people I know. This group consists of my extended family, old friends, and old co-workers. It still doesn't include my current co-workers, or really any other people that I interact with each day. Because I don't really interact with any people, other than minimal conversation with work folks and those in my house. I'm down to about three people I will tell how I'm doing with online. That's about it.

The past year has had its moments. There have been times where I felt like I was making progress, where I could gain some new friends through my newfound freedom. I came to embrace she who is Shannyn; I began to feel more alive. I knew that accepting who I was was vitally important to living any kind of life. And I have done that. I believe in that 100%. But it's not enough.

I made some strides towards meeting new people. I attended some Zoom calls of a local trans support group. I joined some other LGBTQ groups on Facebook that lead to things like playing tennis a few times with someone I didn't know before. I met a couple other trans women at restaurants in attempts to make friends. They were attempts. Some were better than others. They've all gone by the wayside now, and I feel more isolated than I ever have before.

Some of it feels like a defense mechanism. It's like I have this panic room around me that I just stay in. Even online, I am withdrawn and unable to communicate very much, other than telling a few unfortunate folks my feelings like I'm describing here right now. I don't participate in discussions because I feel I have nothing to add. Unless you are talking about baseball or old movies, I have nothing to say. And those things, they only help me pass the time. I'm much less passionate about those things than I used to be.

I want to be something new, to engage with new people on something I'm passionate about. But I have no confidence in myself as a person of value. I find I have nothing to add. Hell, I can't even talk to my kids anymore, for the most part. The panic room has closed in around me to the extent that I have no voice left. Even if I was safe inside (which is not that true, given me having to still deal with myself), I'm unable to reach out to anyone. I'm alone.

Next week I am set to house sit for my cousin while they are out of town. Normally this would be a great opportunity to escape my home, to do whatever I want on my own schedule. A week of total freedom, outside work time of course. I am clinging to some hope that I can find a way to emerge from this funk I'm in, to escape my rut. It's a small hope right now. I'm sue to visit with them this weekend, but actually kinda fear it because I know how NOTHING I've become to the point where I don't know what we can talk about beyond how to take care of their cats.

I had to get this feelings expressed openly. Part of me wants someone to read this and somehow help me see that I'm not nothing. The rest of me really hopes no one reads this negativity. I don't want to be negative; it's just where I am. I really believe gender caused a lot of my social issues, but I can't really blame it now. There's quite a mess to clean up, and I'm confounded where to even start. I have to get out of my own head and into the world. How do I do that when I'm this afraid?