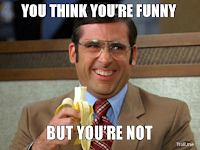 Group member, trying to liven up the conversation: "Ok, it's too quiet. Somebody say something."

That's where I am these days. I'm posting in order to say.....something.

It turns out that my last post, over 3 weeks ago, had the warning signs in it. I fell into some bad anxiety a few days later. And three weeks later, I'm still working on things, the fallout, if you will.

I haven't been able to work the past couple of weeks after fighting through, sort of, the first week where I felt down, down, down. I don't feel tremendously better yet, though I have taken some steps towards that.

I don't really feel like getting into the details of what those steps are just yet; maybe later I will. Suffice to say, they will not be easy, I am filled with dread of the unknown, and yet I have some hope. I look forward to that hope increasing in the days and weeks ahead. Like we all are, I'm hanging in there.

A few key people are helping me keep going, and I love them all so. Otherwise, the lack of human contact has been really hard. Sometimes I want to cry out that I am very lonely, but find that, outside a very few people that I can't even see in person, there's no one. And that's my fault. There are actually lots of people I can talk to, but I'm hesitant to, and they aren't local to see in person.

That's what I mean by no one. I'm starved for contact, so I make it seem worse than it is. I'm aware of it, at least. So I will keep my complaining here to a minimum as well. Nobody likes a whiner, eh?

As for the gender stuff, I haven't stopped, but it's pretty much on pause. This was supposed to be a big year for me in that regard, but it's turned out not so good thus far. I have bigger fish to fry, believe it or not, so I'm not sweating my outward presentation. It'll come. That's something, right?

Shannyn In Your Inbox